So I said goodbye to all my friends and packed my hopes inside a matchbox 'cause I know it's time to fly... we are in the middle of a change in destination, when the train stops, all together we will smile. 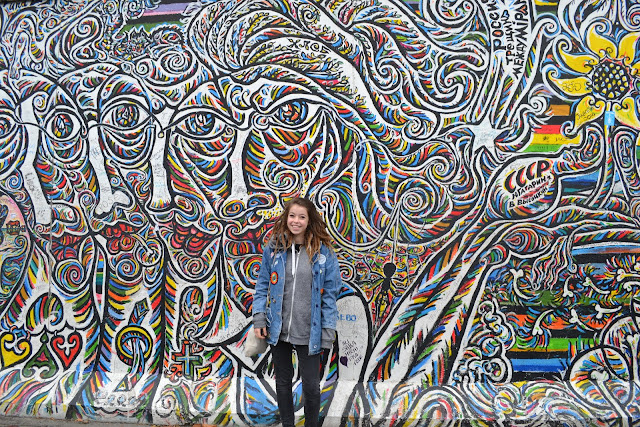 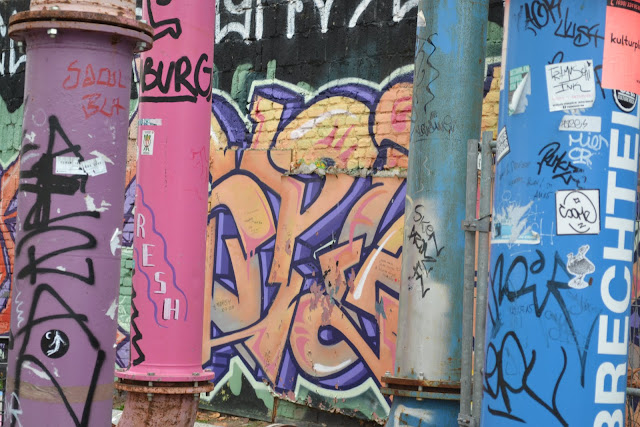 Hey!
I cannot believe how I only managed to write twelve posts this year, which has basically been one of the most exiting and best years I've experienced. Between my last post and this one, a lot has happened: Most important, I moved to Berlin. Yes. Berlin. I was afraid that a small-town girl like me would be a total catastrophe in a huge city like this, but I guess I'm doing pretty well so far. I got lost only seven times, was late approximately five times, saw nine plays already and was in museums four times. I have been here since the 3rd of November, but everything here still seems like an adventure to me. Everything is colorful, exiting, new and way too expensive.
I am working at a theatre for children and teenagers here (which is why I moved to Berlin). A few months ago, I was seriously so annoyed by the mere thought of having to find a apartment or a room here, but surprisingly, someone reached out to me and now I am living in Charlottenburg with the most lovely housemate. In contrast to the cliché of the unfriendly, gruff people in Berlin, I have met only really nice ones so far.
I moved here about three weeks before my work even began as I wanted to see as much as possible of this amazing city. This has proved to be a great decision as I have seen and done so many awesome things here! The entire city is FULL OF ART. There's so much cool graffiti everywhere, and I have been to the Alte Nationalgalerie, basically the most impressive museum I've ever been to. There was this one room in which I found myself surrounded by paintings by Monet, Renoir, Delacroix, Cezanne, Gauguin, van Gogh and even a sculpture by Rodin. It was heaven. 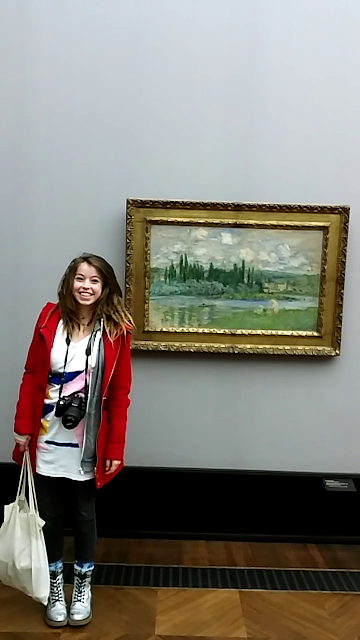 This is me in front of a Monet, damnit! Isn't this fantastic? I am wearing a T-shirt I painted by myself inspired by El Lissitzky, old pants from Zara, tie dyed socks and my beloved holographic boots which were a gift from my boyfriend. I am smiling like crazy in this picture because I was so happy to finally see paintings by such a great artist as Monet!
Another great museum I've been to was the Gemäldegalerie near Potsdamer Platz: They currently have a exhibition about the renaissance painter Sandro Botticelli. In addition to the Botticelli paintings, I also saw art by Valie Export, Degas, Salvador Dalí AND I SAW A WARHOL. And a Magritte. And work by Bill Viola and I basically freaked out in this exhibition because PERFECTION. The works by Botticelli, though, nearly made me cry as they are so unbelievably beautiful and have this kind of paradisian, perfect appearance... it was amazing. In front of the museum, they placed a shell like in the Birth of Venus, so I pretended to be Venus which was pretty funny. 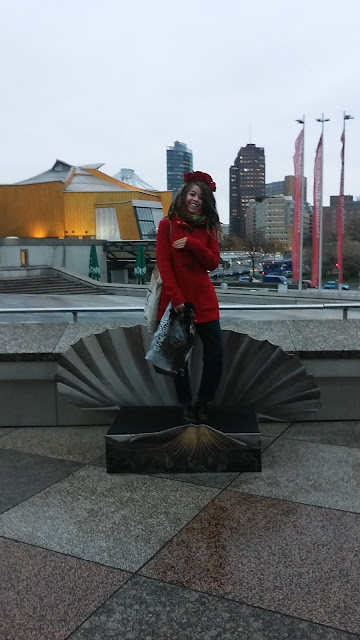 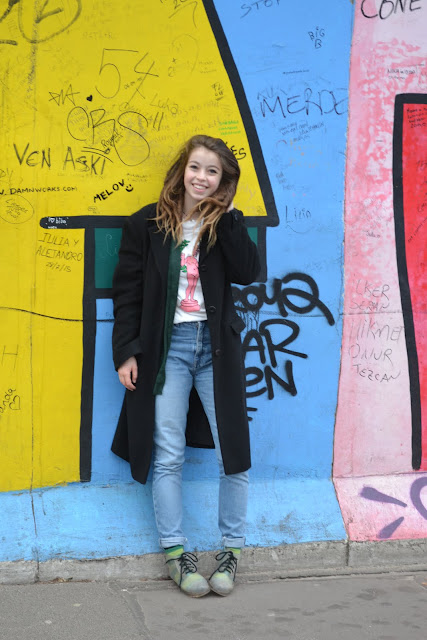 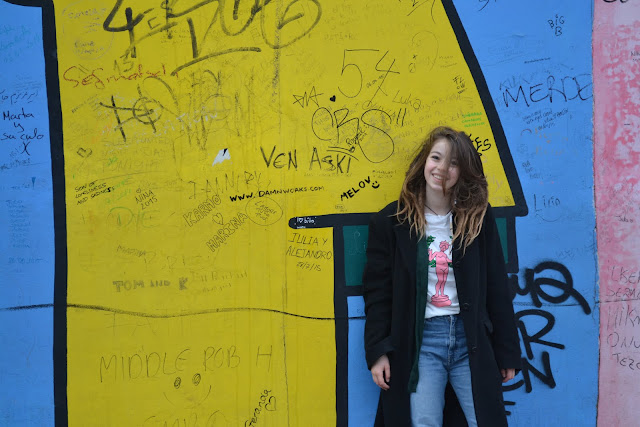 One of my favorite works of art in Berlin is, quite obviously, the East Side Gallery. This is the longest left over part of the wall that once divided the city in two parts. Seeing the wall where people died while trying to get to the other side about thirty years ago, now covered in paint and art makes me really happy for some reason.
Here, I am wearing a shirt I ordered on SheIn. It reminds me of some sculptures by Michelangelo and I like the neutral shape. The pants are thrifted, ad I am wearing these awesome see-trough shoes with green striped socks underneath. I am establishing a pretty random printed socks collection and cringe everyday when I need to put on shoes over my new Harry Potter socks or the ones with the Scream by Munch. Luckily enough, I own see-trough shoes. 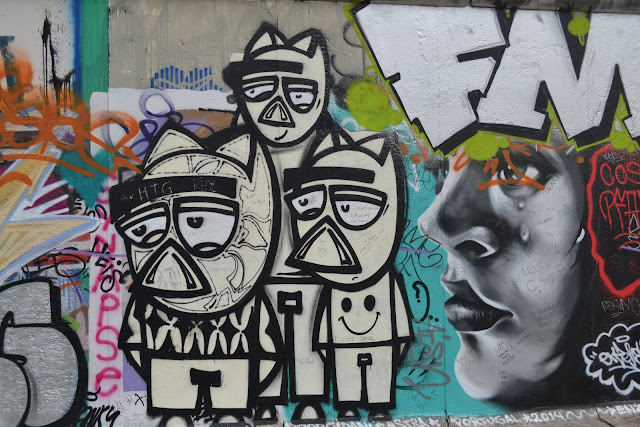 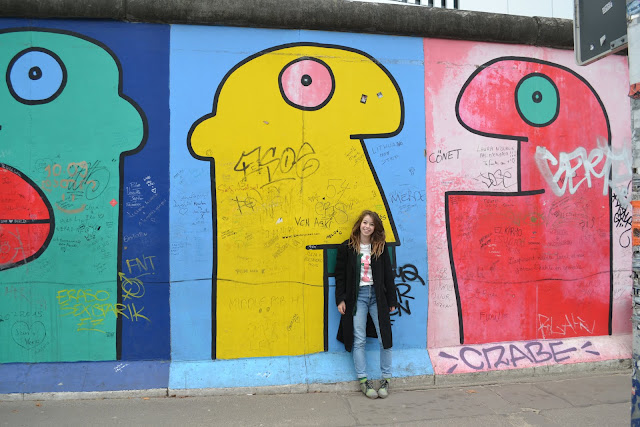 These faces are a pretty famous image at the East Side Gallery.
Regarding dressing in Berlin: it's pretty funny - when I walk around with my giant red flower crown, people stare at me just like they did on the countryside. It's hella cold here, which is why I mostly wear pants and multiple layers of woolen jackets. The good news is: There is inspiration everywhere! So many well-dressed, cool-looking people! It's fantastic and really a paradisian place for a blogger.
In spite of lacking my beloved plain white door, I will post more outfits in the next few posts because I feel so inspired and artsy right now! Too bad the cold wind upsets my outfit plans most of the time or forces me to hide all my nice ideas under a coat, cuddled up with a scarf so you can only see my red nose and my eyes squinting because of the wind. Well, I can take pictures inside.
To put the whole matter in a nutshell, I love Berlin. It's such an inspiring place crammed with great people - I am having a really great time.