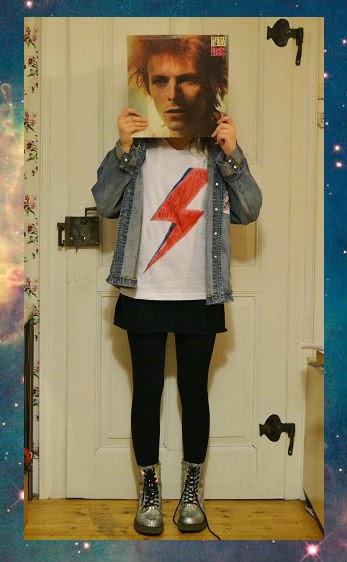 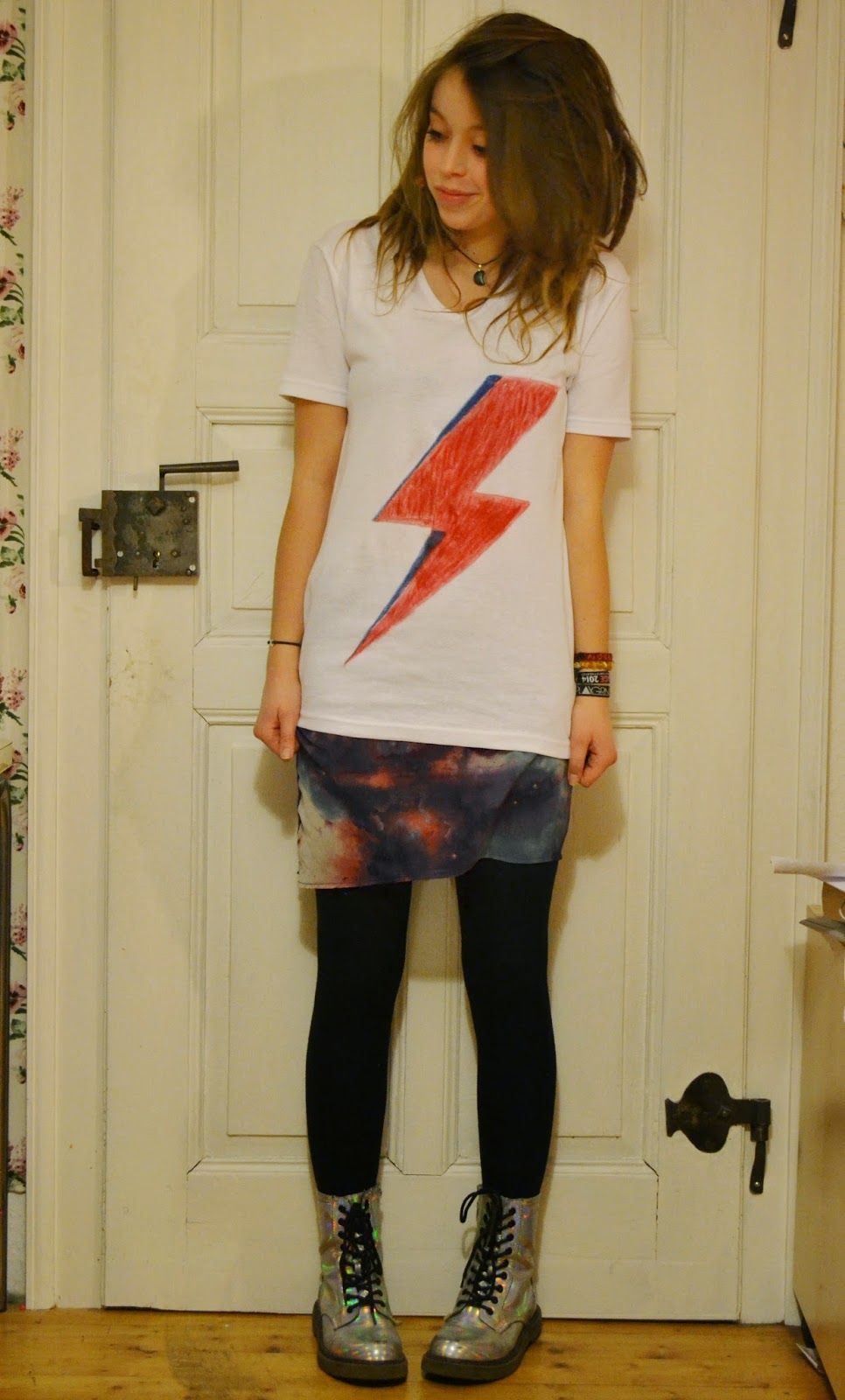 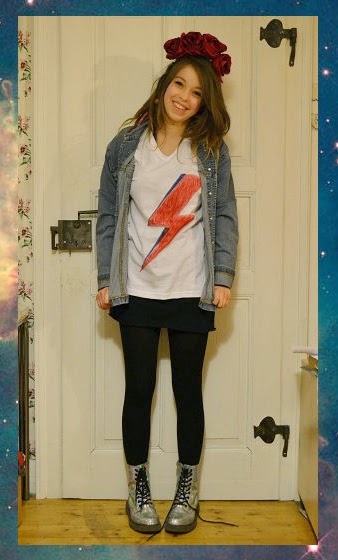 Hello, lovely people!
Take a wild guess who inspired me today. That was pretty obvious, right? It's David Bowie, the god of Glam Rock, music in general, actually and of course he was and still is the god of fashion. All the glitter, all the amazing shapes of his stage costumes, his makeup (!), and the mere ability of him to reinvent himself again and again. He went from a androgynous beauty to a glittery, freaky alien, to a gentleman in pastel-colored suits. And he always - no exceptions - looked amazing. He is incredibly inspiring, and has always had a great influence on me when it comes to letting my freak flag fly, trying myself out fashion-wise, being all glittery and alien-esque.

And just as he wouldn't be a god just because of his style, he's also one of the greatest musicians of all time. I'll use a quote from the Space Oddity album to describe his sounds: "personal and universal, perhaps galactic, microcosmic and macrocosmic" - in any possible way incredible. His voice is so unique and makes me shiver a bit every time I hear it, and on top of his melodies and voice - the lyrics are hauntingly beautiful! Currently, his song "Changes" fascinates me the most. I guess it's because of the upcoming change in my life, which is graduating. But the happiness in this song always cheers me up when I get anxious about the future.

Actually, I have done a post about David Bowie already. But I thought I should also honor his style with an outfit inspired by him. And this is it, obviously. I am wearing my beloved iridescent boots, which really remind me of astronauts and therefore of Major Tom and therefore of David Bowie, so they matched perfectly with the galactic vibe I was going for. The jeans jacket is handmade, just scroll down a bit for details. I haven't been able to put it off ever since, so you're going to see this jacket a lot from now on. The flower crown is also handmade and I totally overwear it - but somehow, I don't feel properly dressed without a crown! And the bigger, the better. Well, the most recognizable garment in this outfit is probably my T-shirt. I bought a white shirt in the men's apartment today and spent the entire evening sitting on the floor, occasionally dancing a bit and listening to David Bowie's "The next Day", a Best Of album I own, and the record of Space Oddity. How I love this record. I bought it at a fleamarket about a year ago and one can only imagine my enthusiasm when I saw the record - of course I had to buy it. Unfortunately, somebody has drawn Bowie a beard on the front cover, but he still looks awesome. 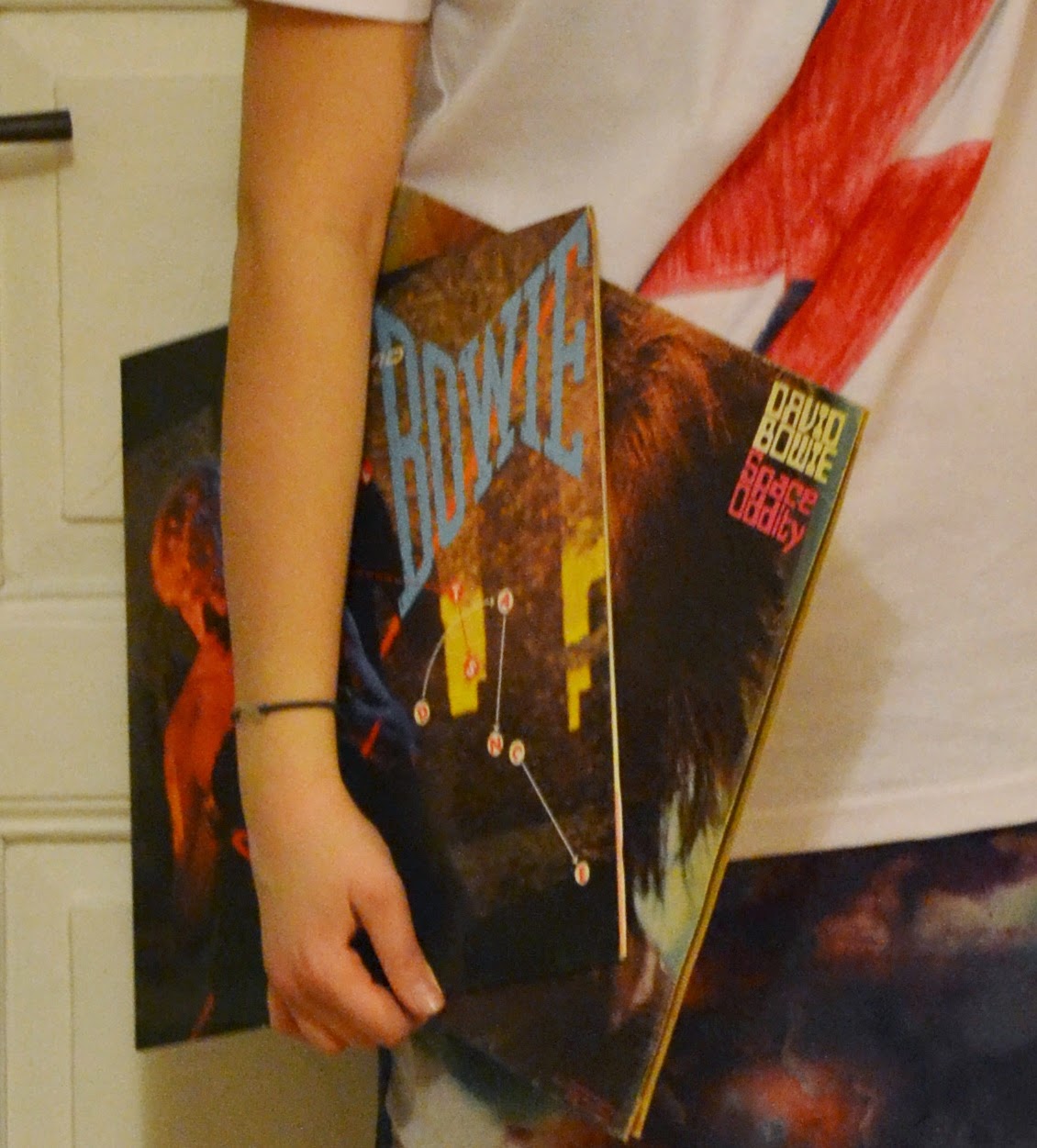 I have this habit that every time I get obsessed with a person, a era or anything else, I begin to collect a huge bunch of stuff related to my obsession. I have collected at least ten things related to David Bowie, some of them are here in this post. These are the two records of him I own - Space Oddity and Let's Dance. My favorite songs on these are Memory of a Free Festival and Ricochet, though the version of the former is different than the ones you can find on youtube - and frankly, it's way better on the record.
I also did this super cute mini shrine dedicated to the King of Glam Rock, which I made inside a cassette box. Contains a lot of glitter, lyrics, a close-up of his two different eyes and other pictures. 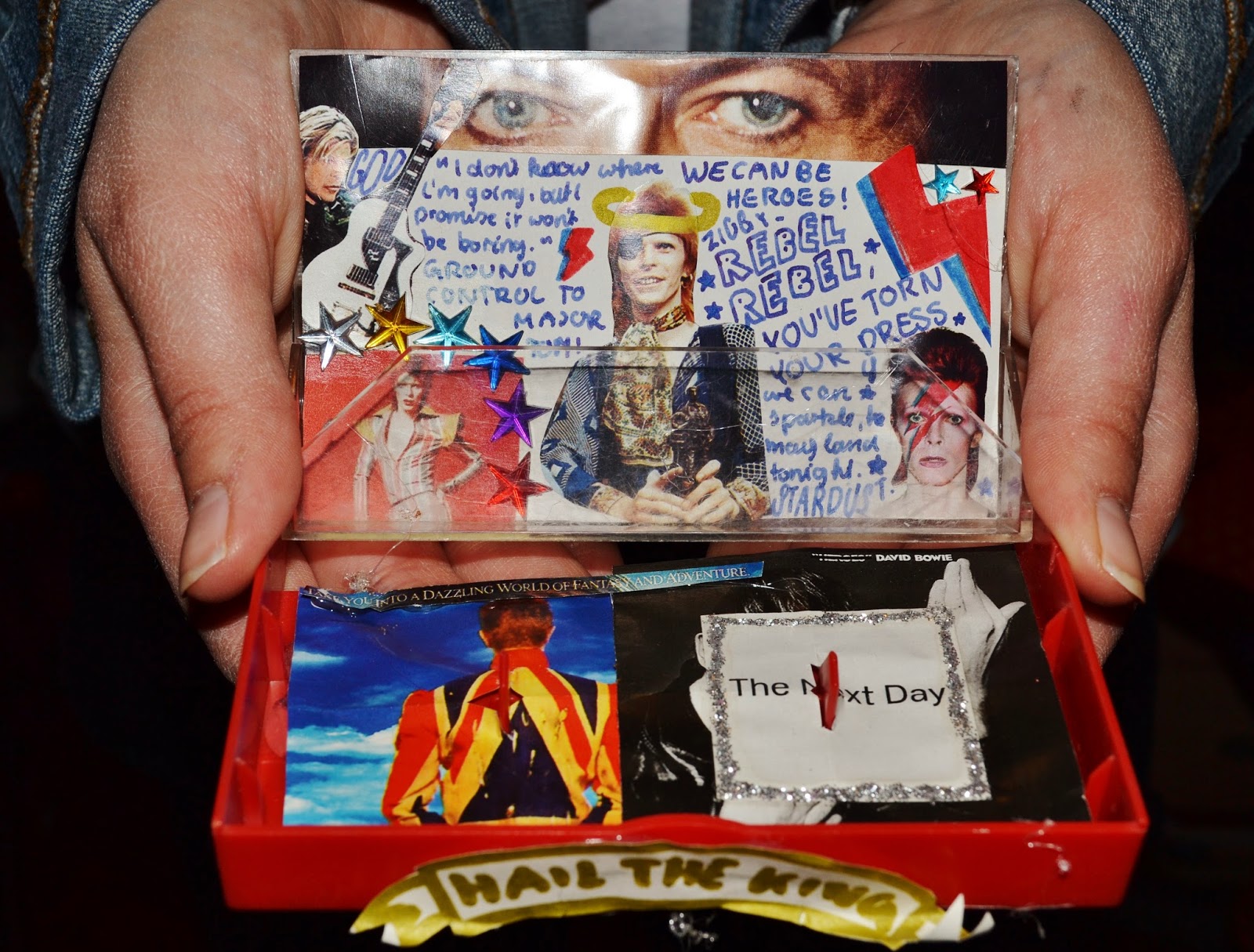 I think this sums up my obsession quite well.
This blog is basically transforming into a fan girl diary, right? But that's fine - there's still fashion!
I hope you have liked this post - and just tell me what Bowie means to you.