The movie "Atonement", starring Keira Knightley, is a sad-to-cry drama with a heartbreaking romance. A young called Briony, a  a little bit big-headed girl, sees her sister, sees different situations and arranges them together to a horrible crime, which destroys her sister's relationship with her boyfriend. A simple mistake of a girl leads to two broken hearts, which never will find to each other again. Briony claims Robbie (her sister's boyfriend) of raping her sister as well as her cousin Lola, which isn't true at all. As a result, Robbie is arrested. When the second World War starts, Robbie is released from prison for joining the Army. He mets Cecilia (the bigger sister, which completly broke tie with her family ) again and they renew their love. Briony tries to apologize to Cecilia, but the bigger sister coldly answers she would never forgive her. In the Sixties, decades later, Briony, which now is an famous author, she releases her book which tells the whole story about her misunderstanding and the impact. Only the end is different: While Cecilia and Robbie died tragically in the World War without accepting Briony's apology, Briony apologises in the book and Cecilia and Robbie are reunited.
The first part of the story takes place in the 30ies in the huge house of a wealthy english family and that actually is the "style inspiration"-part of the movie.


In the first part of the movie, all the dresses are so awesome. When I watched the movie with my family, everybody was SO annoyed because I was like "Oh my god... Saw this dress? Wow how amazing! I want to have it! Oh yeah, and saw this one? I am freaking out! " every second minute. (I mean, the dresses aren't everything. These rooms are flowered all over! ) Ginger Lola is wearing the most amazing candy-colored frilly dress EVER. And the Outfit of Cecilia in the first scene is absolutly awesome, even the underwear. Here are a few dresses in which you can feel like a rich english girl in 1930. ( Remember: These are dresses for the first part of the movie.) 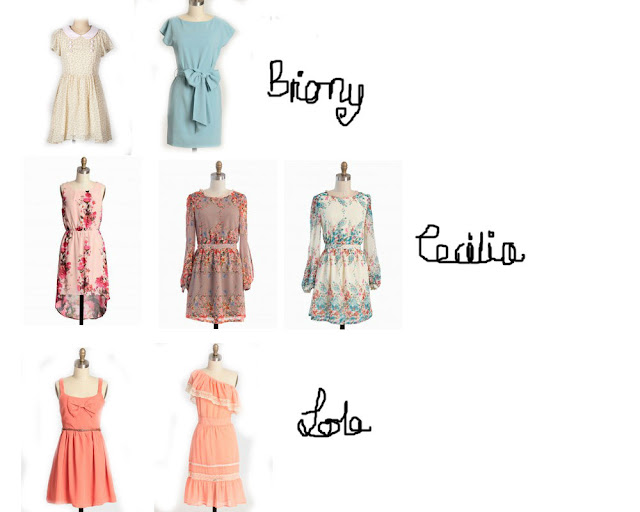 All of these dresses ( exept the first one from here) are from Ruche.

Have a wonderful rest of the day,

Email ThisBlogThis!Share to TwitterShare to FacebookShare to Pinterest
Labels: Fashion