Limitless undying love, which shines around me like a million suns 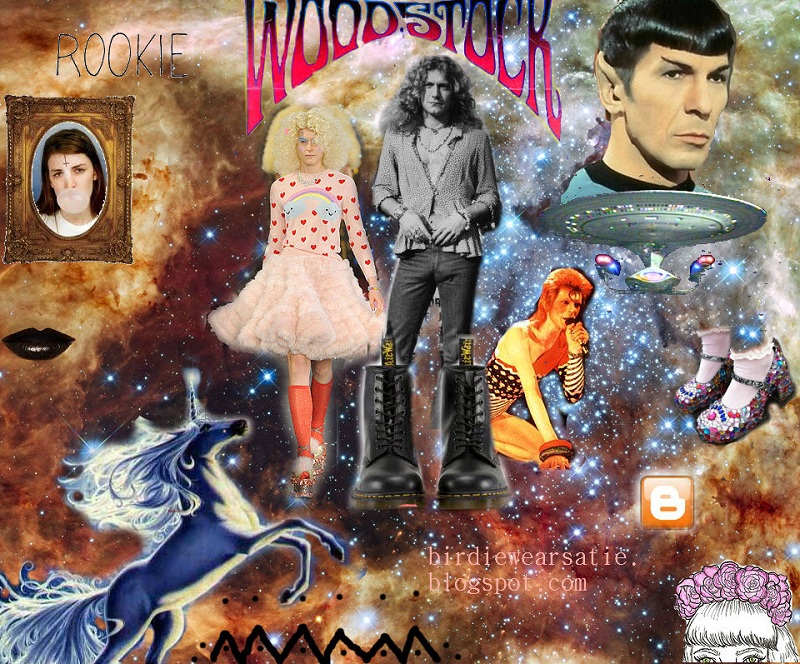 Hey hey. Sorry for this lack of posting... (isn't it awful that I am apologizing for this everytime?!) So. This is a collage I made. It's actually about everything I love and could not live without. I think you know that I love those stuff if you are a follower, but here's why and what exactly.
I love....
the Outer Space. It's incredibly beautiful, and I mean, neverending. Neverending beauty. Full of plasmas, unknown planets and stars, it's the best thing on earth ever. All those secrets waiting there, every star (There are approximately 20000000000000000000000 stars! Get this! ) and all those alien dudes. There is nothing better than Outer Space. In my dreams, I open my window above my bed and all I see is the Outer Space.
For the crew of the USS Enterprise, this dream came true. It's beyond amazing what they are doing everyday: " Space: The final frontier. These are the voyages of the starship Enterprise. Its five-year-mission: to explore strange worlds, to seek out new life and new civilizations, to boldly go where no man has gone before. " My favorite character is Mr. Spock, from Vulcan. He was the first Vulcan to ever join the Starfleet, and he turned out as an amazing Captain and friend of James T. Kirk. Being super bright, he is also totally funny and ironic. Just have a look at his ears, isn't he adorable?
Done with Outer Space stuff in my universe, I think it's time for Rookie now. Rookie, as weird as it may sound, actually changed my life. I wouldn't be the same without this magazine. It definitely made me more self-confident and stronger, I learned to ignore haters and to do what I want without caring about the thoughts of others. This will never change again. Besides that, Rookie also influenced my style. I think it's so hard to define my style, and I actually don't want my style to be defined. . But "Rookie Style" is a definition I love and it means more to me than just clothing. I love the community of Rookies in the blogosphere.
The person who introduced me to Rookie was Tavi. I had been reading Tavi's blog a few times and when I saw that she published her own magazine, I was totally in awe. Tavi is also the person who introduced me to Blogging. She showed me so many things and stuff, I deeply admire her for what she is, what she achieved. And I admire her for being herself. She's truly one of the best teens ever. I never knew what to say when I was asked for my "role model", but since I am knowing Rookie and her, I know she's my role model. I also made a zine for her. Gosh please do not think I am a creepy stalker, I do not have thousands of pictures of her hanging around and I am not dreaming of her (yet... haha.).
I also love love love Blogging. It may sound obvious, but I truly do. It's so much fun sharing your thoughts with the world, and I love all my followers (hey you!) and I also made some amazing friends. I swapped zines with Carla from Redpunzel and I'll send Flower's Zine at thursday (I promise. Life's been so busy. School sucks.). I also sent a flower crown to Maddie. I've got to know the most awesome people since I am blogging, and some of my friends are stalking my blog and they admire what I am doing, and I love what I am doing. I cannot understand how people "hate" my blog because, when they don't like it (or me), why the hell do they even look at it? Whatever, blogging is amazing and I hope when I am a grandma with three kittens and a donkey, I am still able to do it.
Something closely related to my blog is fashion, obviously. I go nuts for Meadham Kirchhoff or Doc Martens (see last post). Fashion is just my way to express who I am and who I want to be. Let's save this stuff for a blogging anniversary. But I go nuts for fashion, and I mean it.
See what's left. Woodstock, glittered shoes, black lips ( I wrote about them earlier, you know, they are witchy and amazing.) , unicorns, David Bowie and Led Zeppelin. Which is *obviously* perfect. Let's start with the music stuff. Led Zeppelin and David Bowie - no better music in our galaxy (I wonder what music Spock would like...). David Bowie is such an amazing and inspiring man, he was never afraid of doing something that would seem weird. He just gives a fuck and rocks the stage. He's immortal. And kinda hot, by the way. Led Zeppelin is (as David Bowie) just too awesome to describe. "Stairway to heaven" is, in my opinion, the best song ever. It's just pure beauty.
Another amazing kind of music is Reggae (good Vibrations...). I wish wish wish I would be living in the Sixties and Seventies - it seems like the perfect time to me. Full of petticoats and this peace movement dudes, known as "Hippies". Just, they didn't care if it was raining or stuff, they just partied all day long and were hanging around being stoned, wearing daisies in their hair and living life. It must have been like seeing the center of the universe, full of beauty, something which can't be described.
What I love, too, is Glitter. It's just literally the best thing ever! It's magical!
And so are unicorns. They do exist, maybe in a left valley in the Himalaya mountains full of purple flowers and a lake to clear for this planet. And one day I will ride a unicorn and it will be my best friend. And it will glitter because everything perfect glitters!

Wow. I wrote way too much. And I am not even done yet. Some daily life: We adopted a little incredibly cute hamster! My Dad found it at the waste dump because someone really awful threw him away! He's a little bit sick, but he's eating and he's fluffy and his name is George. Such a Cutie!

Hope you had an amazing day,