Her mother smokes diamonds and she sleeps out in the car. Yeah, but she remembers Chicago, the musicians and guitars and grass by the lake and people who laugh'd and made her poor heart ache. 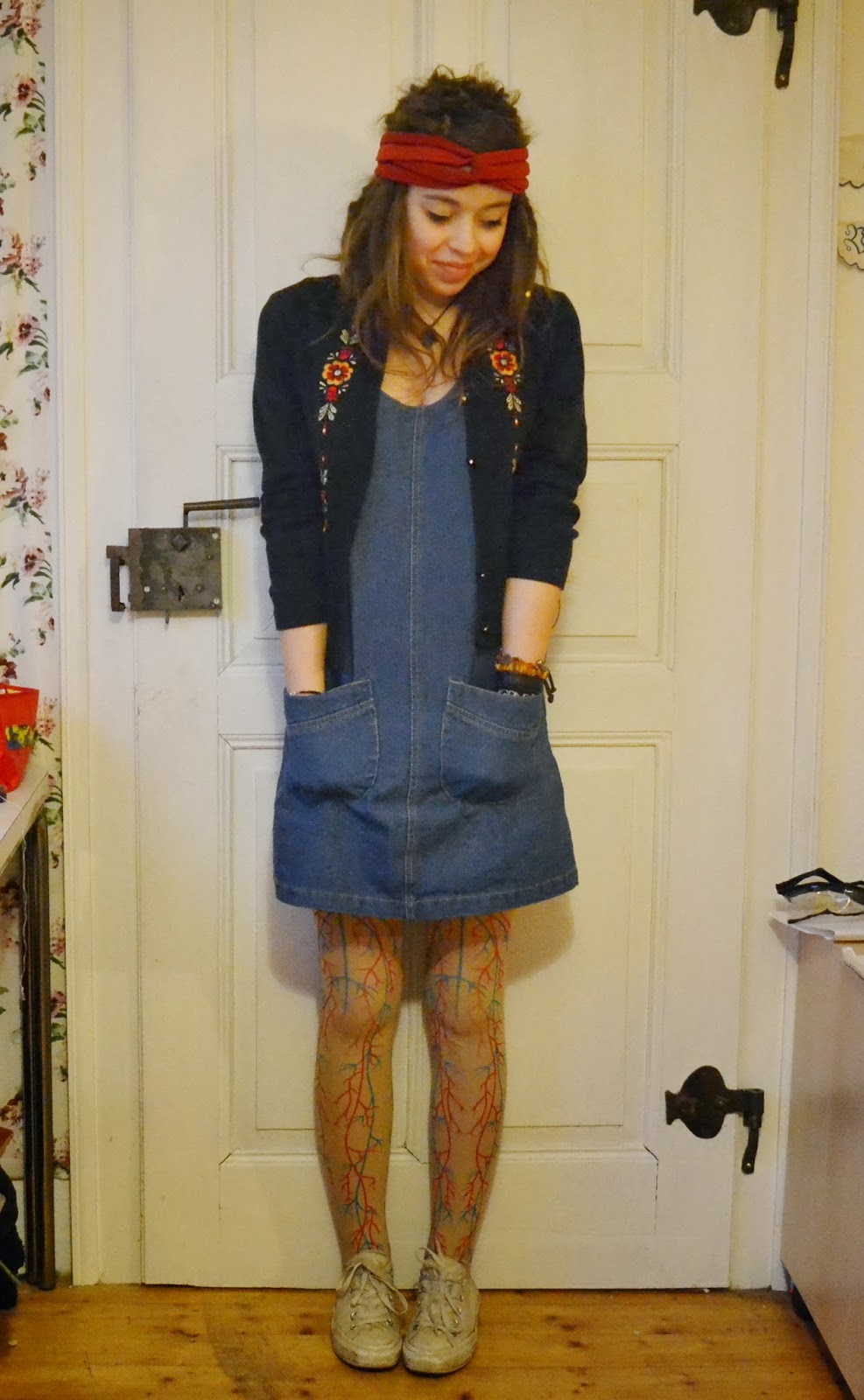 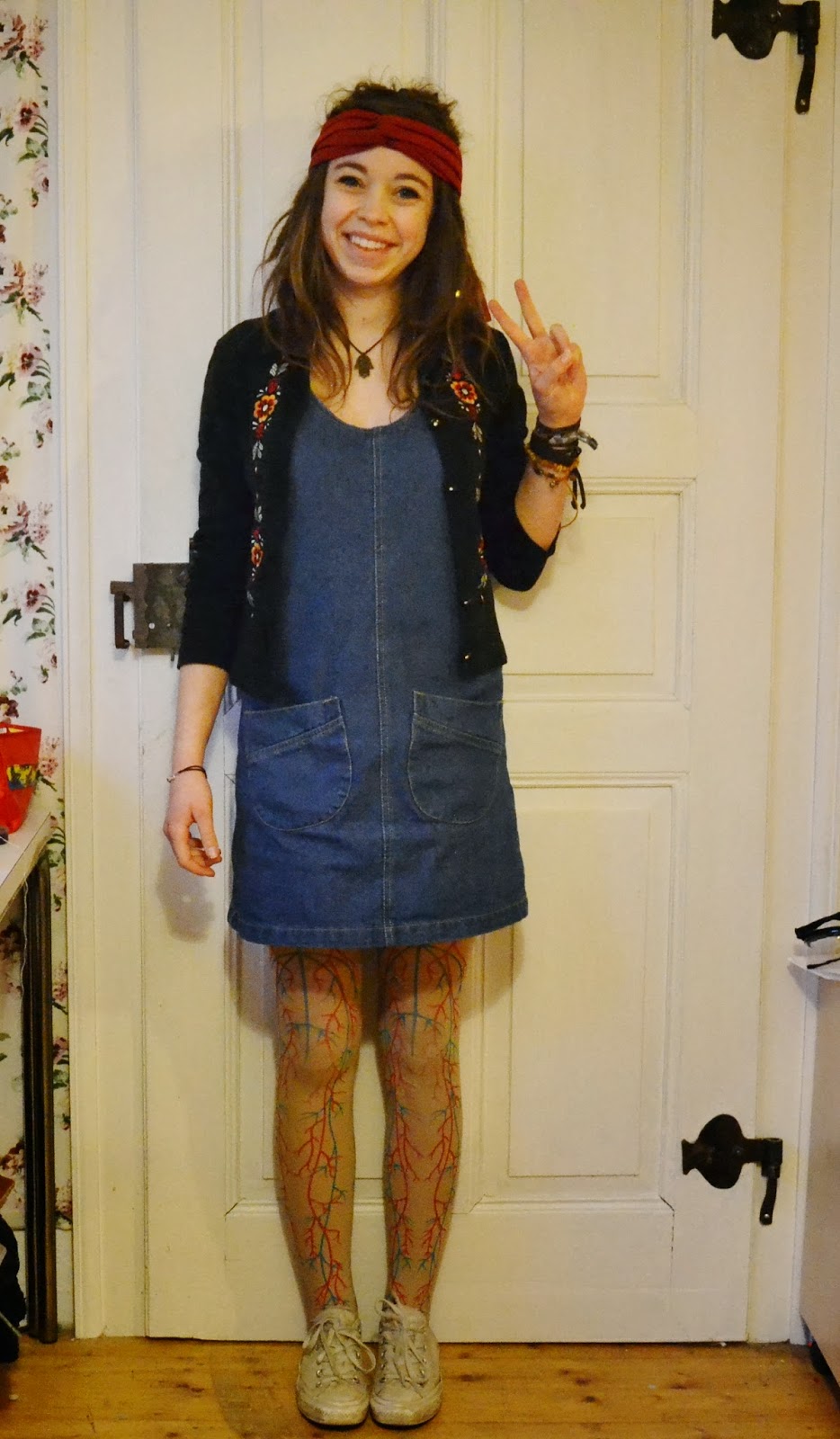 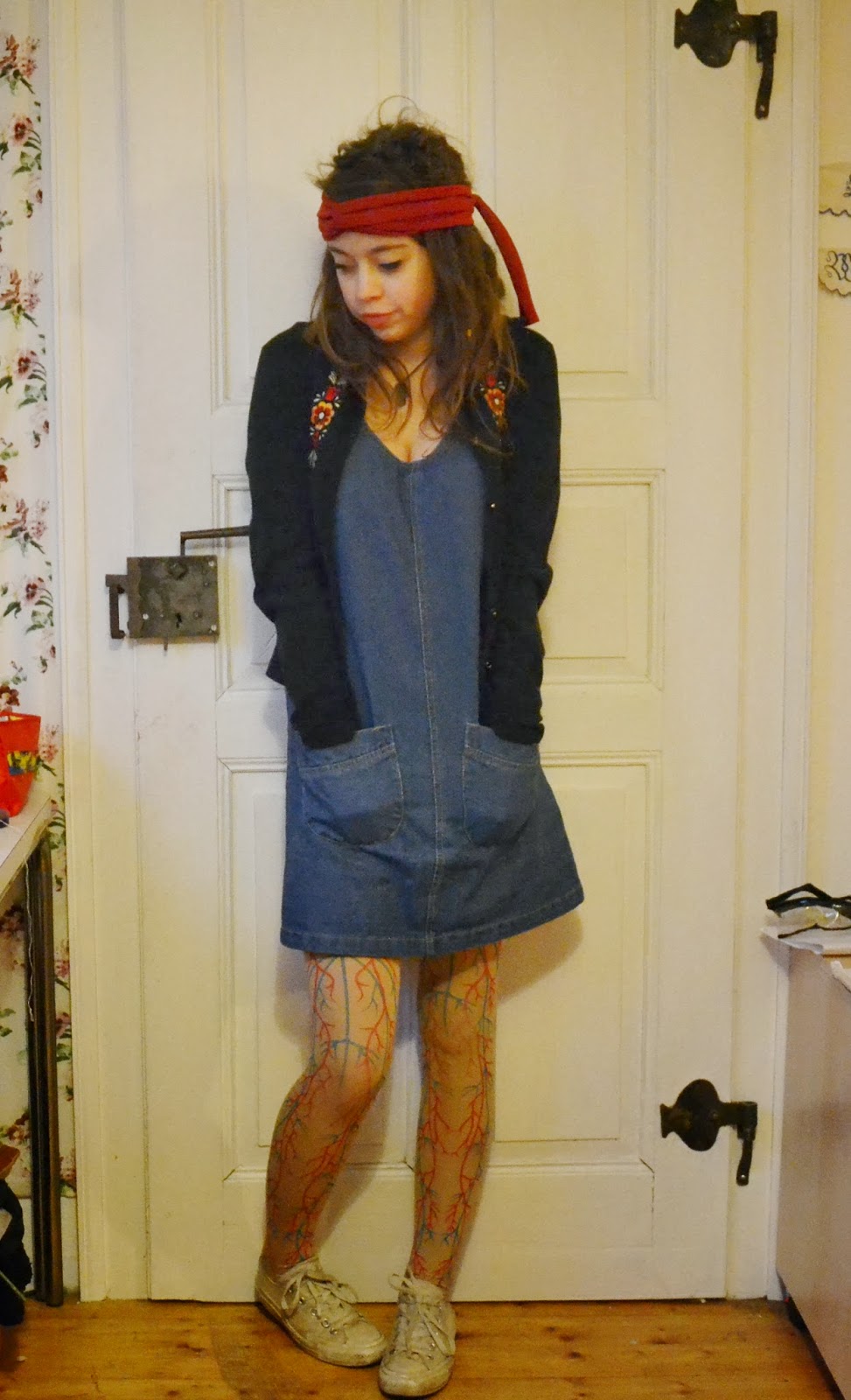 sorry for the awful quality!

Hey folks! I kinda messed up my resolution to blog more often, but at least I wrote a bigger post today.
I wore this to school today, I was in the mood to dress up today. But actually wearing it felt slightly weird. I've been wearing mostly super-large men shirts, comfy dresses and huge jackets and wearing something tight again felt kinda weird. I had the constant urge to just put on some sack or something, but I was in school so it was impossible. I still think it looks quite nice, though, haha! I like how different styles are mixed here. I love the contrast of the vein tights combined with something floral. I am wearing a dress from Primark which I love but barely wear (it's thight, duh.) and a thrifted embroidered cardigan. AND MOST IMPORTANT GUYS LOOK AT MY HEAR THESE ARE DREADS AND THEY ARE MINE! It's their 3-months-and-2-days birthday today. I love them, and I loved doing something crazy with my hair. But there are some cons, too. I paid a lot of money to get them, but the person who made them didn't do it well. There are a lot of waves and loops and basically, I have to repair them constantly. My hair grows fast, so I have roots already which need to mat (that sounds gross, but it isn't!). I'm working on them all the time, but dreadlocks get nicer with time, so I'll trust on that. Besides that, I love them. I can do so many awesome hairdo's with them. I braid it often, or knot it, or just wrap that turban-thing around it. DREADS ARE AWESOME. 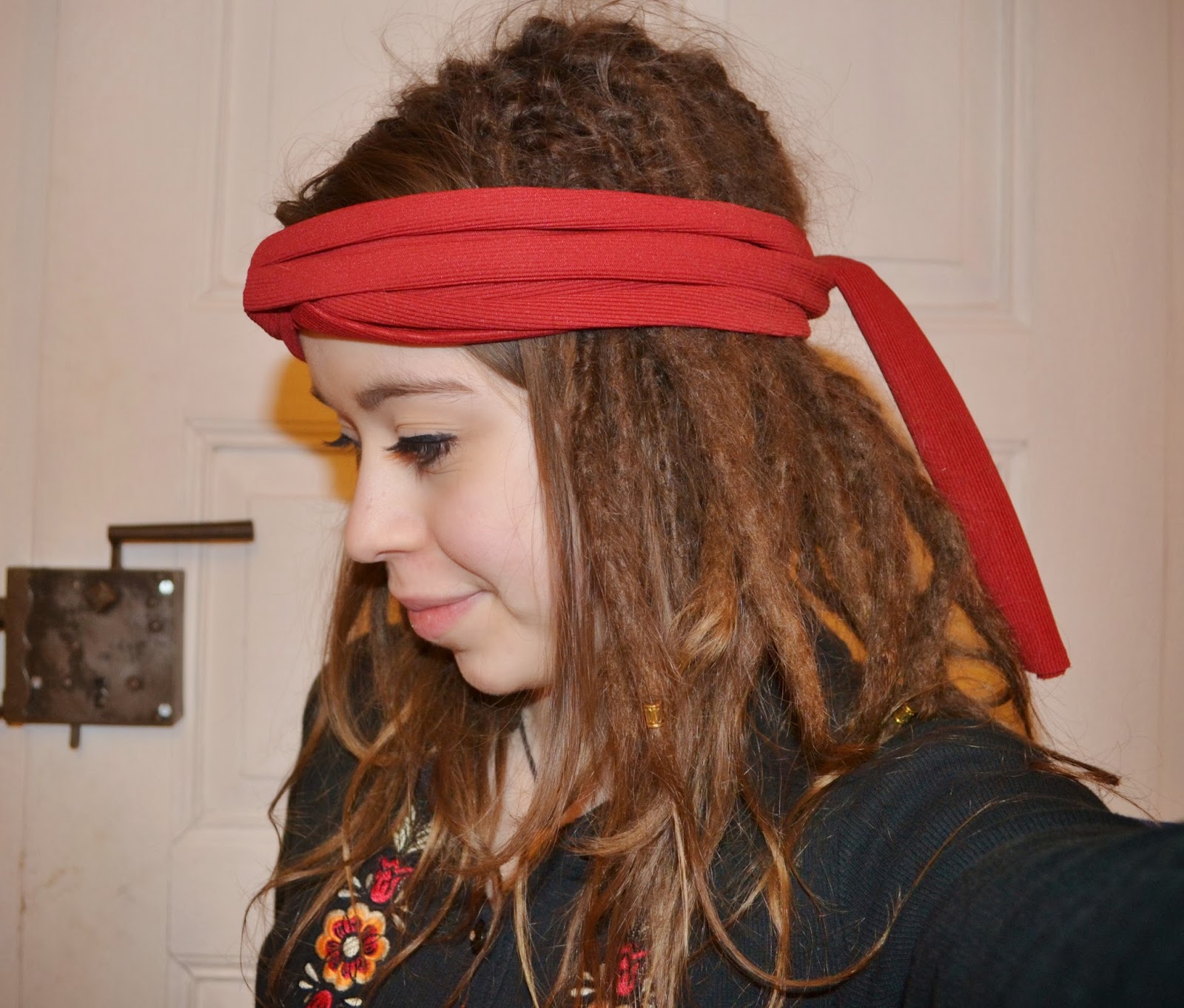 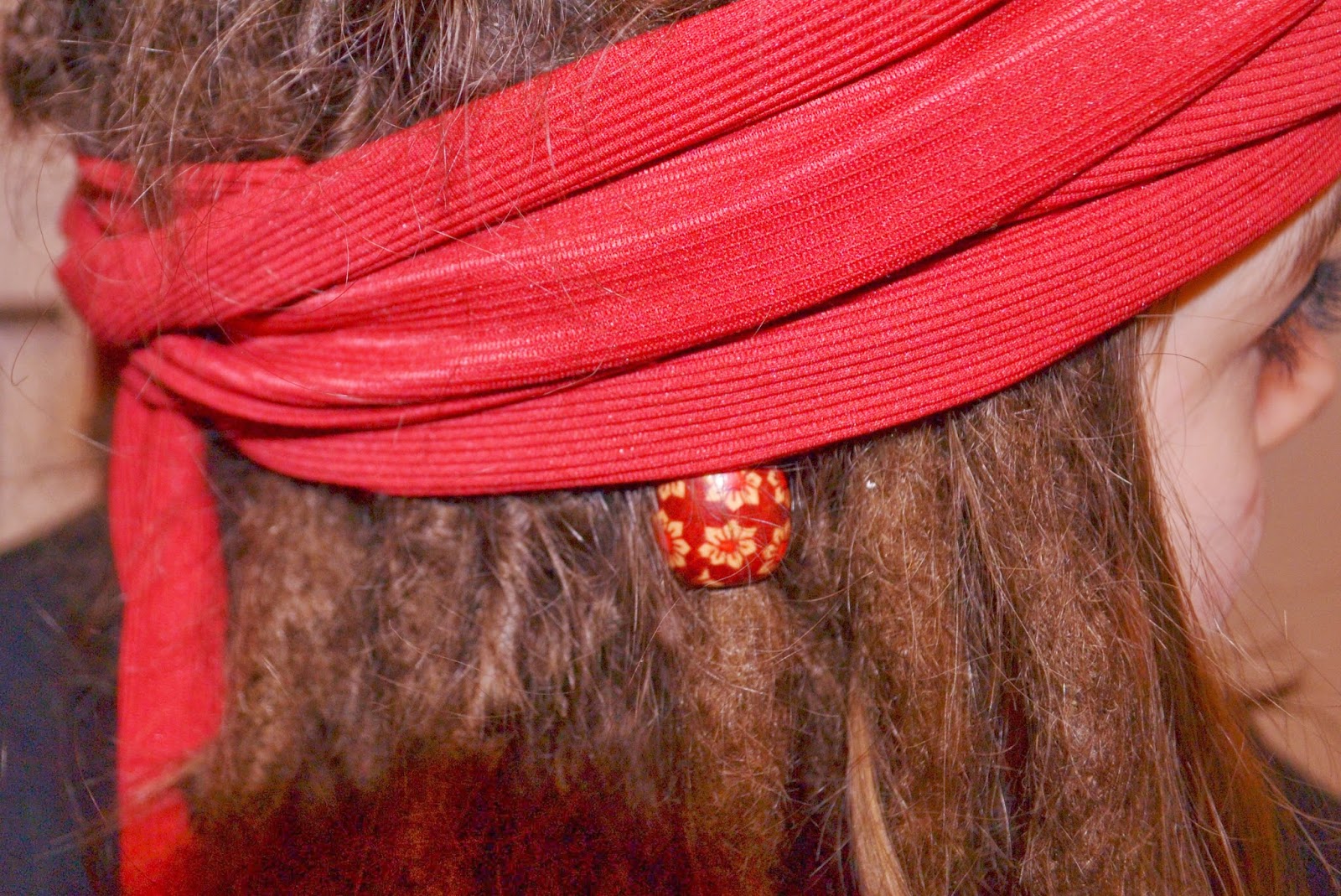 I had some time this weekend to catch up with the posts of the blogs I follow. It was a lot of fun to see those people again, you know? Especially Eva from Style Wandering.
Eva kinda drives me crazy, but in a good way. Her writing really makes me think a lot, about everything, and I wish I could just get my thoughts into words, but I guess that won't work. My mind's just like a adventourous playground and I'm sitting on a swing of confusion, swinging back into the daily life and forth into the actual life. I just wish I had more time to think and to create, more time to read because I feel almost unhealthy without art.
I'm also getting over that identity-crisis thing I mentioned. I just stopped beating myself up because of it, if you will. I don't worry about what others think of me anymore  - and I know, you probably think I never did. But that's not true, and it's hard to admit. I never cared, and never will care about what others think of me. Though, I wanted to provoke and seem like an individual and be individual and myself, above all. It sounds so stupid, thinking of it now, but it never really came to my mind that I have been an individual since I was born and no one is going to change this. Everyone's an individual, even if he/she dresses mainstream, listens to charts and wants to be a secretary later. I guess, I was just stuck in that mad point of view, but slowly, ever so slightly, starting to be more than a girl rebelling with fashion.  I still listen to different music than most people, I still don't care about strange looks, I still want to try everything out, I still dress weird (don't worry, dear followers of a fashion blog!), but I stopped thinking about it that much, in a way. I'm growing into myself, I guess. I do what I want, whether it's normal or provoking (most of the time it's unconventional, that's just the way it goes, haha).
Trying to find yourself is something which misleads you often. Don't get me wrong. I do want you guys to try out stuff, finding out what you like an dislike, but don't beat yourself up. You will never find yourself, like saying "That's my identity forever, deal with it" because you'll never be able to define yourself rationally, and that's okay! You're an ever-changing being. It's impossible to define yourself forever, "like a toaster or something" (to quote My so-called life). I'm trying to enjoy the journey without worrying if there's even an aim, some sort of ultimate cognition. The journey is the destination. What I'm wearing and what I like is only a part of who I am at the moment, obviously.
I think self expression and identity are very different. I think self expression is incredible, because it is the ability to express parts of you through thousands of mediums and acts, and as these parts of you change, the way you express them can too, and to me, that seems simple and beautiful.
- Eva from Style wandering
Yeah, shut up, stupid me, you'll never put it into words as Eva does.

Wow okay, you deserve an oscar or something if you were in school today and still had the nerves to read that.

Lots of love, my dear readers,