All the modern things like cars and such have always existed - they've just been waiting in a mountain for the right moment, listening to the irritating noises of dinosaurs and people dabbling outside... 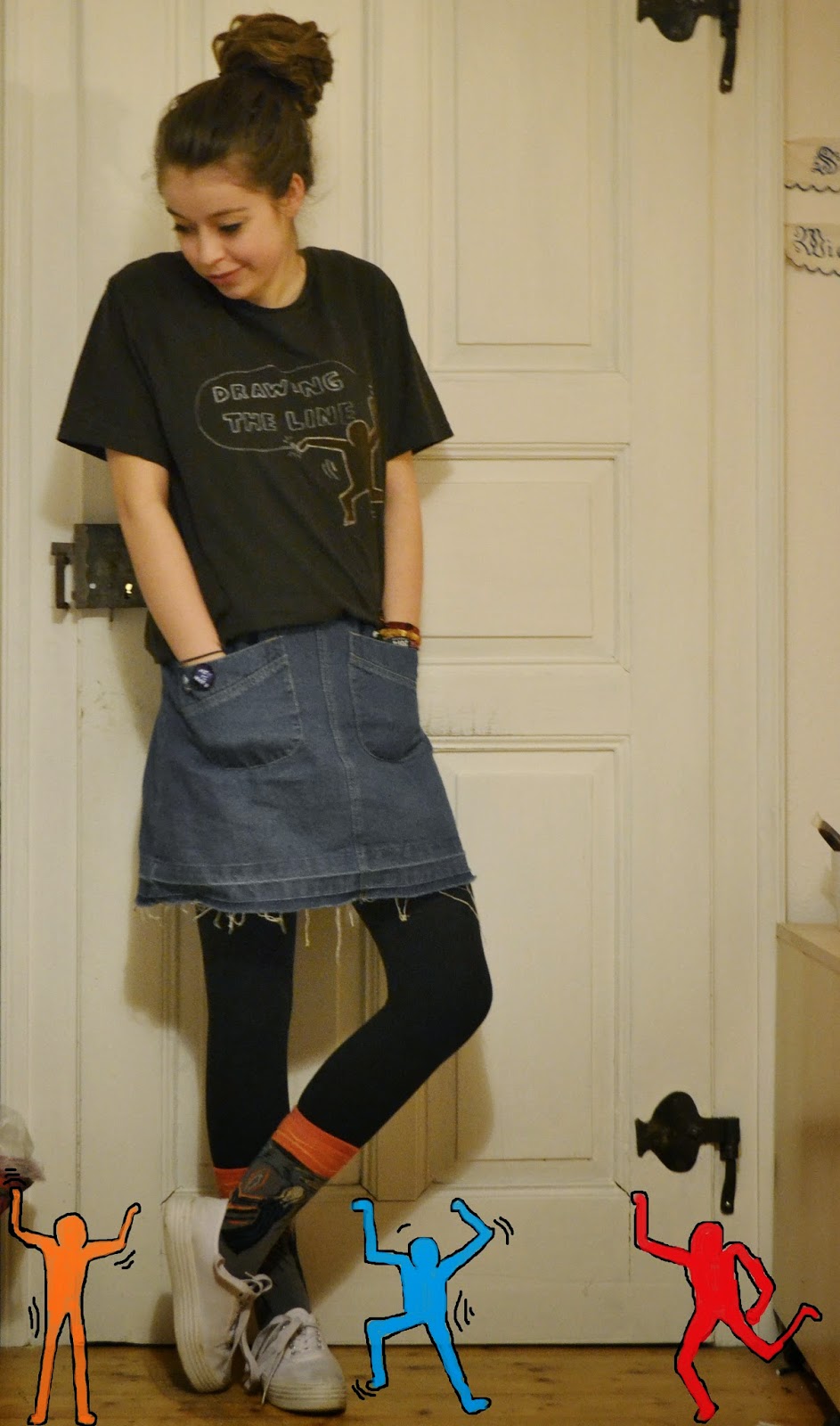 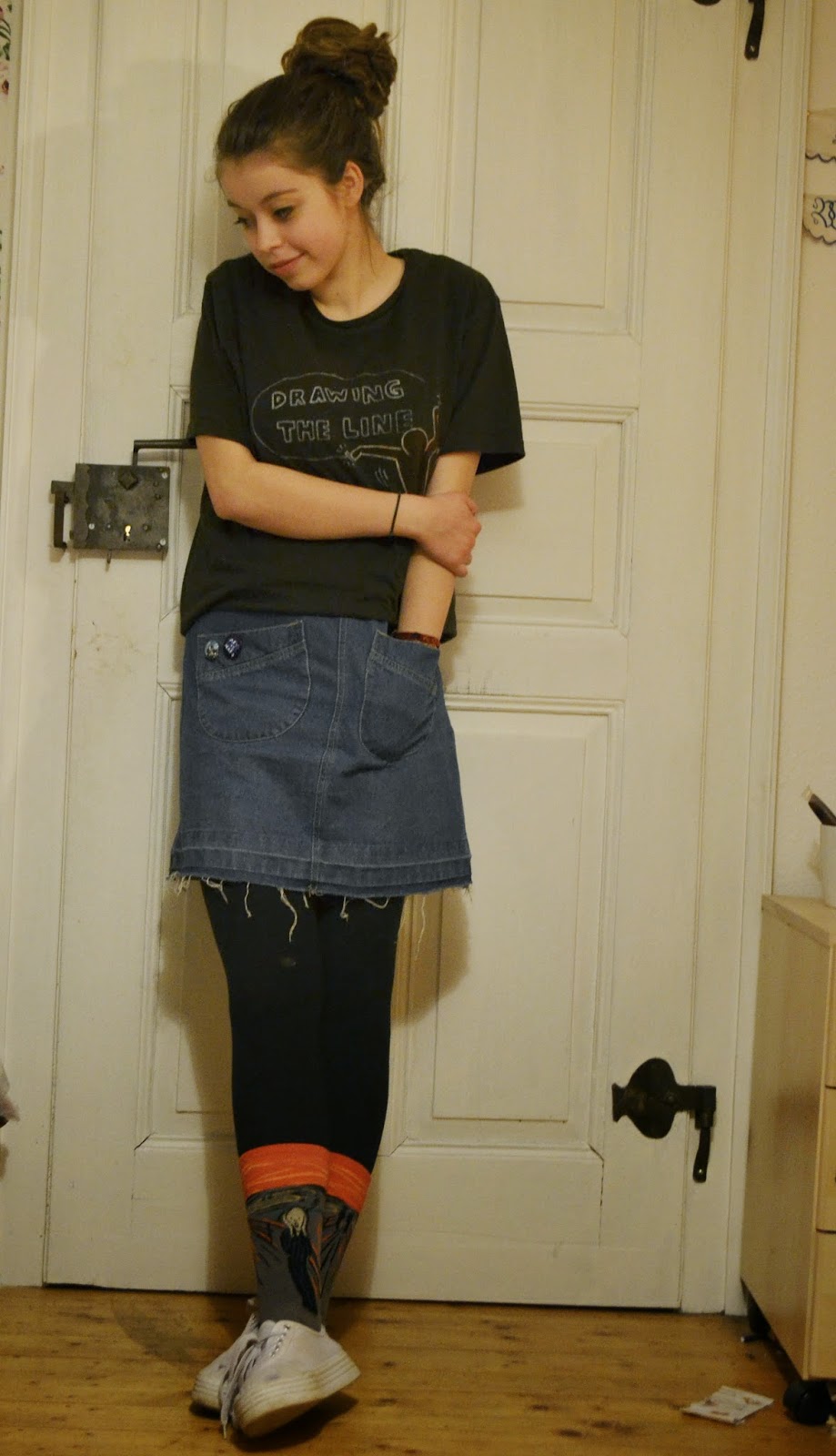 Hey there.
I'm pretty proud of myself as I am right now writing a post for the second time a month. I guess March was a good month - very stressful, though. I had to write eight tests in school, plus having rehearsals for a play last week in which I had the main part. And, of course, my birthday! I'm seventeen now.
Besides the fact that I now can quote Bowie "I'm seventeen and my looks can prove it" and sing Dancing Queen for a reason, I'm not allowed to do anything I wasn't allowed to do before. Being a minor is really stressful to me, as I've always wanted to be an independent person which I can't only because of that stupid number that is age. However, I think seventeen is a very exiting age - it's somehow the final change from teenager to adult, or at least to a teenager who is supposed to be adult. It sounds nice, I guess.
I had a lovely birthday, by the way! I spent it with my family and friends, and as I mentioned last post, the weather was great and therefore my mood was, too. I got some really really cute presents which I'm going to integrate in a future post but there's something extremely exiting I've got to tell you. I am going to see the Australian Pink Floyd Cover Show this weekend with my boyfriend! PINK FLOYD, you get me?! I'm so very excited and happy about this!

Getting back to fashion now, because you probably want to hear that rather than me talking about me.
I am wearing two of my very favorite items: First, the socks. I bought them last year from Hot Sox, and they are incredible, right? There's The Scream by Edvard Munch on them and it's obviously awesome to wear such a wonderful work of art on your feet.
Second, I am wearing this T-shirt I made a few weeks ago: My personal Keith Haring interpretation. To be honest, I've never liked his stick figures, not at all, until last year when I finally learned more about him personally and about his art, too. I was amazed of how politically active, inspiring and revolutionary he was. And I made friends with his stick figures. I really love that T-shirt, because the stick figure is drawing the line which is exactly my awkward kind of humor.
I'm indeed mixing some very different artists in one outfit - but that's okay to me, as I have extremely different interests so when wearing your personality in an outfit, why not incorporate what seems contrary? Am I not kind of contrary by myself?
Wow, philosophy. Anyways, I am also wearing a denim dress I bought quite a while ago for three euros, I think. The shoes are also (quite) new, but they look worn already. I don't like snowy white sneakers, I think they need some kind of dirty character, if you know what I mean. On my dress are two badges: One with Kurt Cobain on it, the letters on the other one read "Art is hard" (which it is, especially if you have to do a ten pages paper for Art lesson in two weeks). 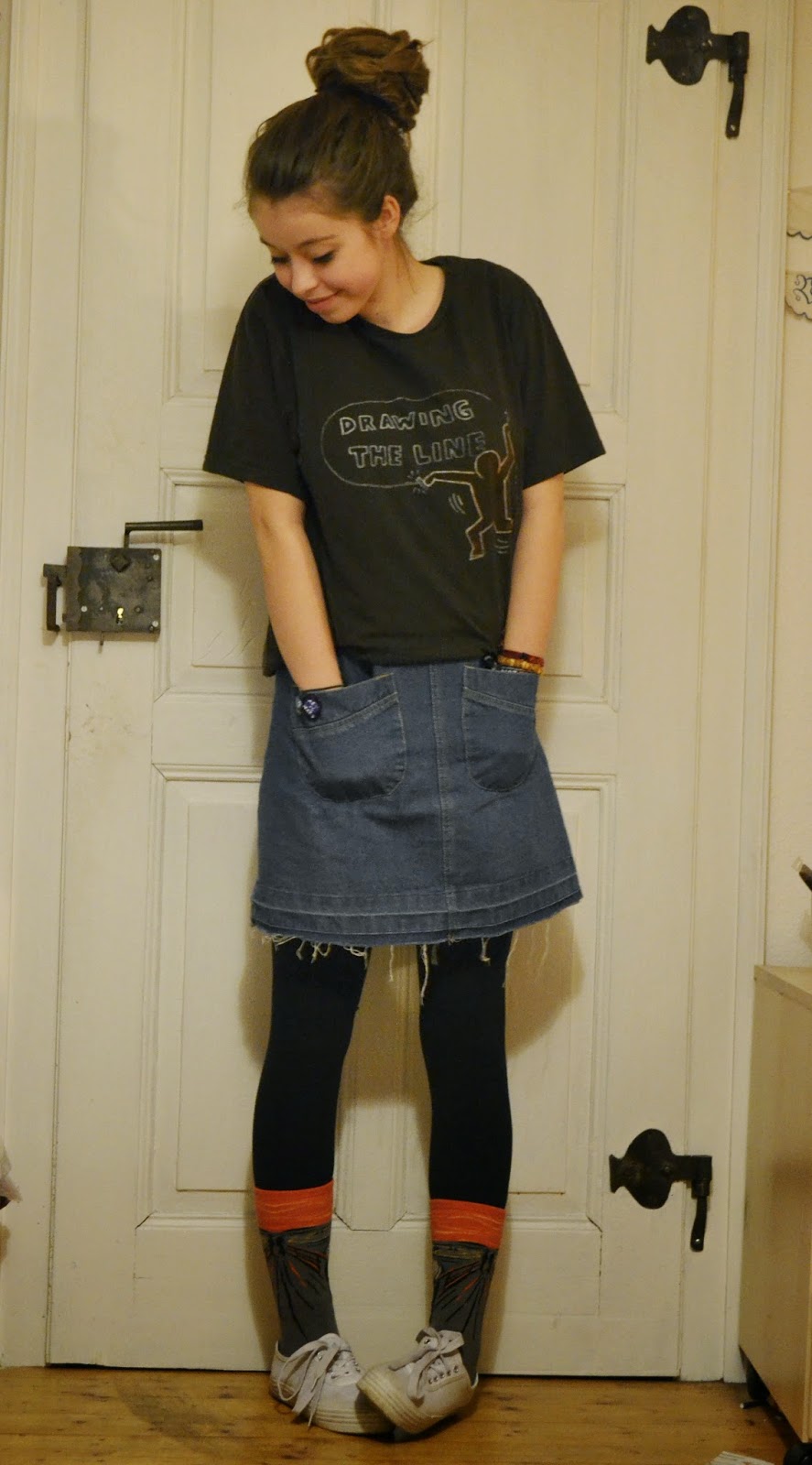 There's also an unusual amount of orange in this outfit - I normally don't wear orange because my skin tends to look like a corpse's one when doing so. But how could anybody resist wearing The Scream on socks?
Here's some ~artsy~ inspiration which I thought matched this post quite well. 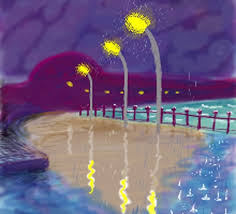 Tumblr. The one below as well.

Well. I'll probably never get better at ending a post properly.
I hope you're all fine (and by the way, thank you so much for reading my blog. Each and every one of you makes me utterly happy) and having a nice week/month/year so far.

The less we talk the more I understand, our names are written all over that road - let the magic unfold, remove the rear view mirror, eye of the hurricane, paste permanent sunset all across the window pane. 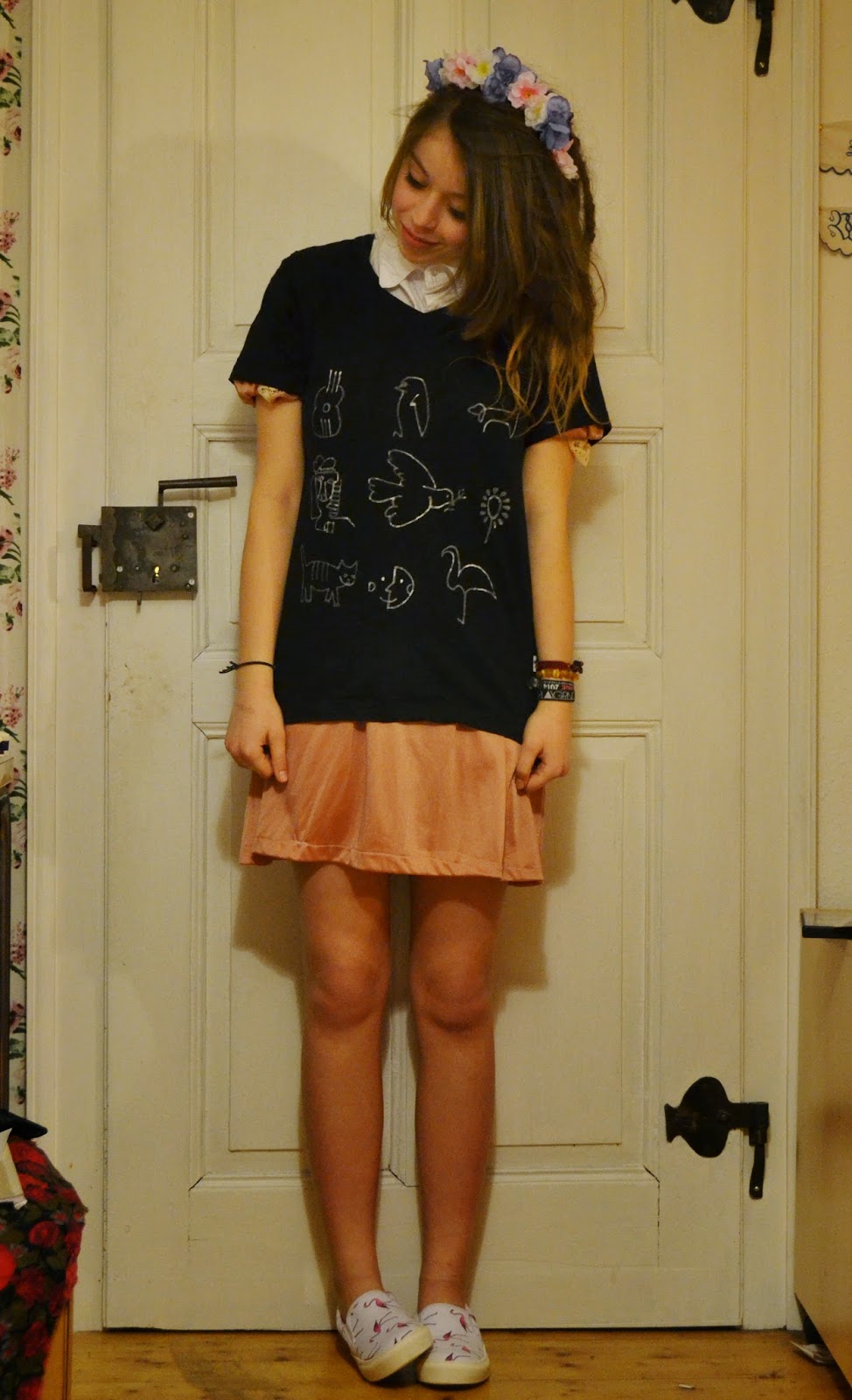 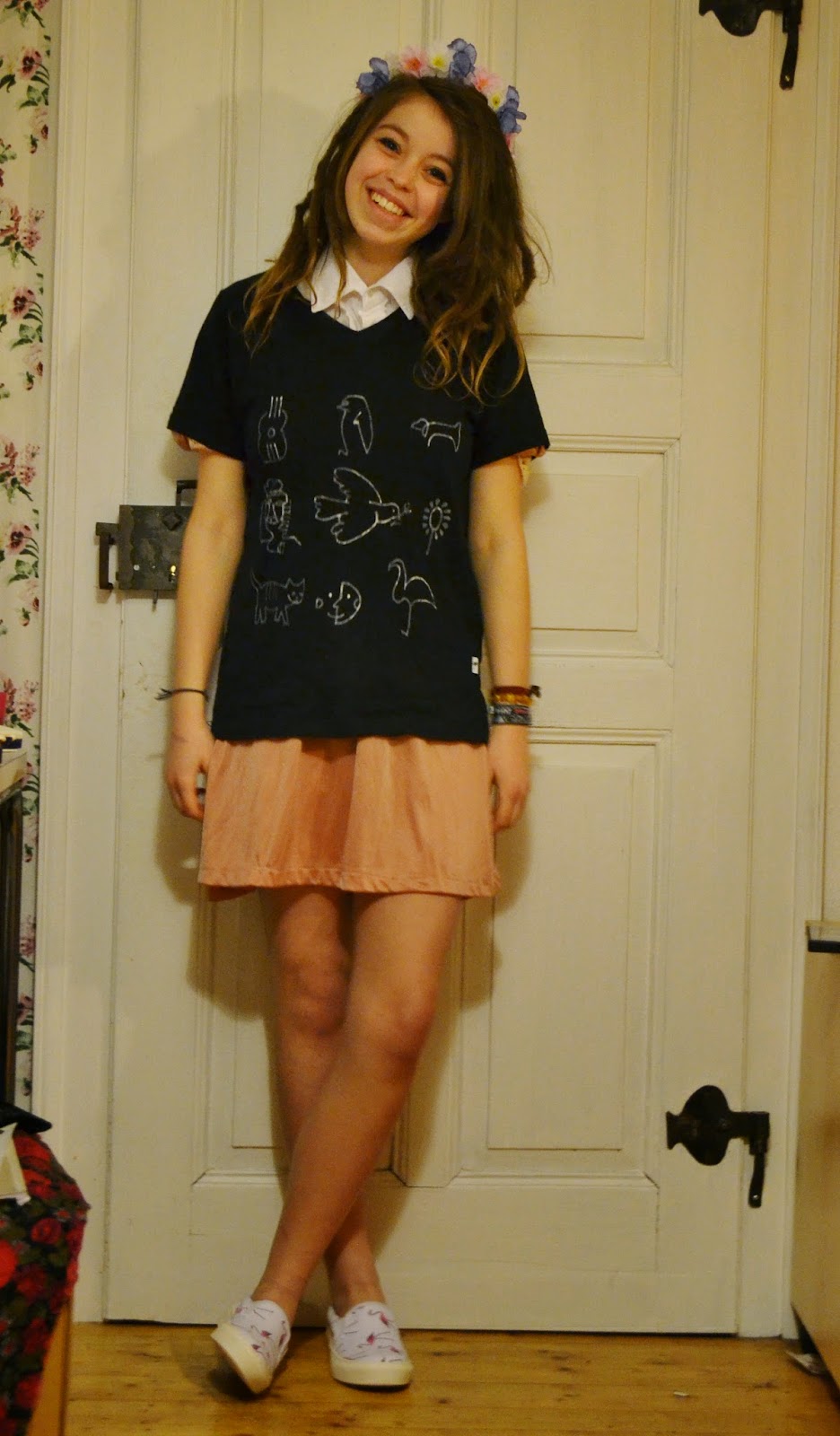 Hello fellow human beings!
I'm so exited! The air smells like spring - finally. I have been longing for the sun since December, basically. Today was the first sunny day in ages, so I spent the entire afternoon outside, crafting, procastinating and enjoying the rays of the sun on my face. I'm the kind of person whose mood really depends on the weather - which leads to the rather unpleasant fact that I'm in a bad mood almost the entire winter. However, nothing can bring me down as long as it's sunny outside. I've been extremely stressed lately, just overthinking everything like three times and getting mad about the smallest things. Therefore, because I always dress according to my mood, I have been wearing a lot of black lately. But now, I think I will wear more colors again - brighter, spring-y-er clothes. I started this weekend by making a flower crown! It has been way too long since I last made one, but I bought a huge bunch of fake flowers, so there will be more flower crowns from now. I chose some lovely pastel flowers to match spring.

Also, as you may have noticed, I've been getting really into modern art. I made this tee two weeks ago with a friend of mine. We met in the afternoon and spent almost the whole night listening to music and painting the t-shirts we had bought before, so it was quite a lovely day! Anyways, it shows some of Pablo Picasso's doodles - some are oneliners, which I've been drawing on every surface within my reach (although they're really easy to draw, mine always look like scary mutants... ) . But I think the tee turned out quite nicely! My collection of t-shirts keeps growing.

Take a closer look now - can you spot the flamingo on the shirt? To match it, I'm wearing these shoes which were sent to me by the lovely people from Rocket Dog. Although I usually don't wear slippers, I really adore the super cute flamingo print on them. 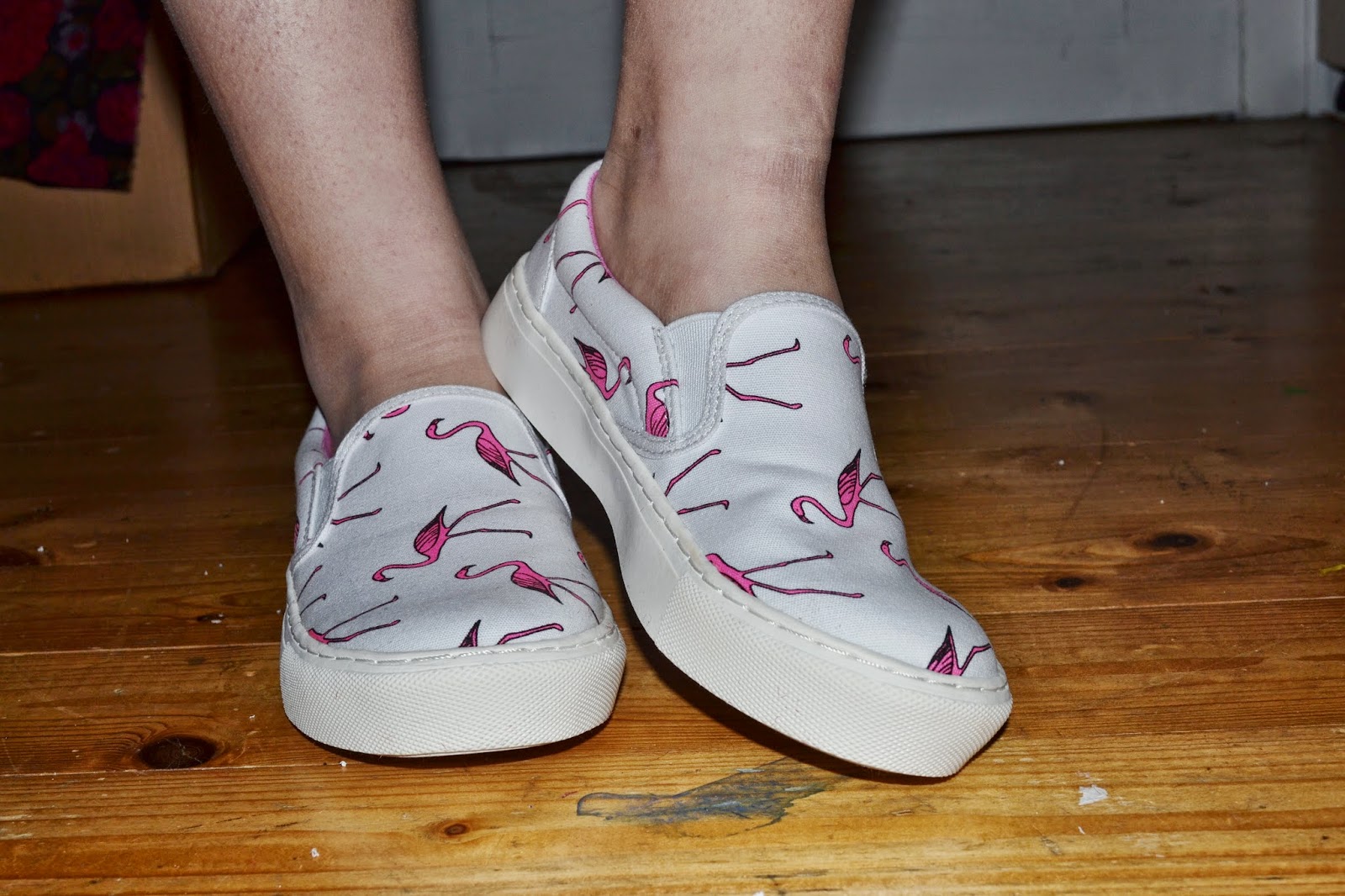 Besides that, I am also wearing a dress from Etsy as a skirt and a thrifted white collar.
Actually, I planned a lot of other posts already - so be prepared for a lot of art and fashion.
As said earlier, I'm really into art lately. I started a journal project about artists, and also I'm obsessed with my Wreck this journal which is literally the best thing ever, it's so much fun! I've also been crazily collecting clothing related to artists, which you are all going to see sooner or later at this blog, obviously. I've also been sewing and crafting a lot. Mostly to escape the pressure putting boredom that is the last year of school (actually the last few weeks. Oh gosh ). 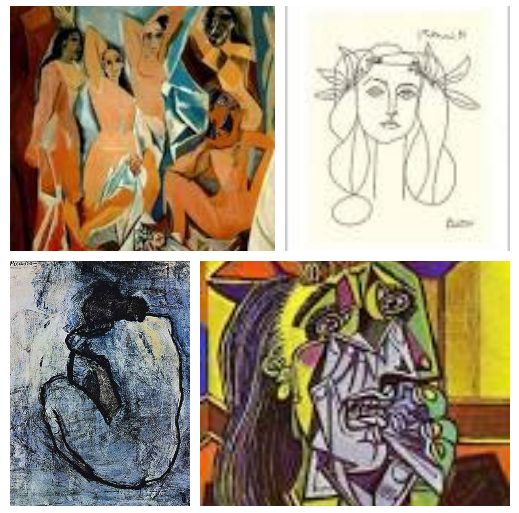 Yay for art.
In other news, I'm writing for a German online magazine called Hildegard, which is really lovely - you should check it out. Even more important is the fact that there'll hopefully be a ROOKIE MEETUP in Germany! So, German Rookies, please drop me an email at "birdiewearsatie@web.de" and you can join. I'd be so happy if it worked!

Well, I hope you liked this post and wherever you are reading this, I hope it's sunny outside (poor Australians).