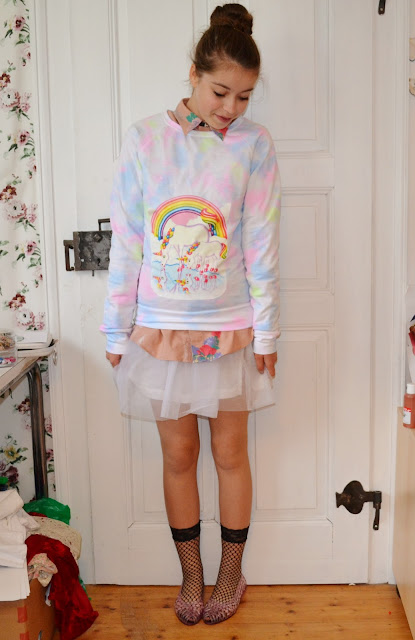 Hey honeys! It has been forever (again) since I last posted. Anyways, here's a ~very special~ outfit post. It's special because of the unicorns. And David Bowie. I really like this outfit, actually! I think it's kinda my style in one outfit, like a mix of Rebel Girl by Bikini Kill and Reasons to be beautiful by Hole and Always by Erase. Well, I am wearing my fishnet socks from Spain, super cute jelly flats from the thrift store, a tulle skirt from when I was eight or somethin', a gifted blouse, a DIYed studded collar that you can't really see, and, most important, my brandnew Unicorn jumper! Just to make sure you got it, Unicorn jumper. I DIYed it today and I am just in love with it. It's super cozy and unicorn-ly. The tie dye jumper is actually from Primark, and I ironed that unicorn picture on today (I own this really awesome textil print foil to iron prints on clothing). Here's a closeup of the unicorn: 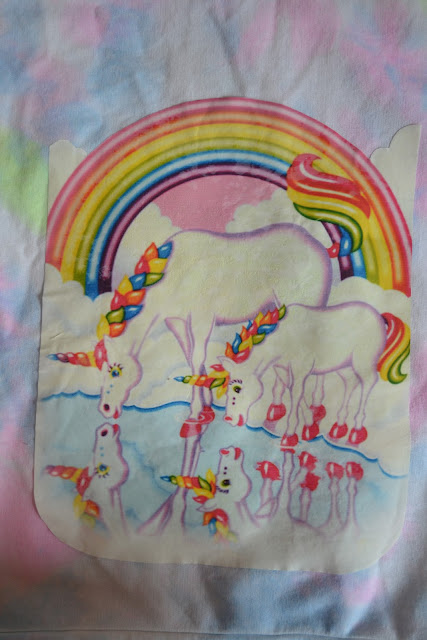 HOW CUTE IS THAT. Everybody thinks I am a freak because I believe in unicorns. I am still trying to figure out where they are. Anyways: 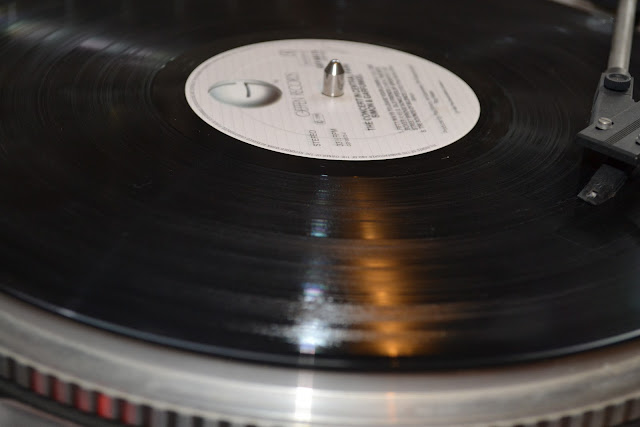 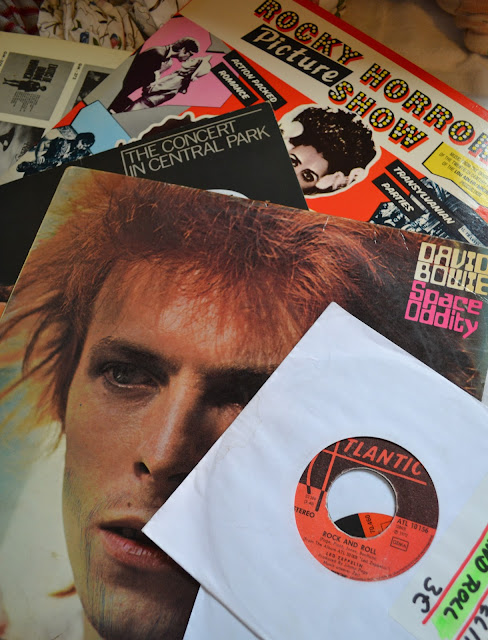 I went on a really big fleamarket last weekend! I found no clothing, can you believe it? But I found so many records! I love love love my record player. I own some singles from Led Zeppelin, they were three bucks each and with the songs Rock'n Roll, Immigrant song, Four sticks and Hey Hey what can I do. It sounds so different played with a record player, much cooler and more original. I also bought Space Oddity by David Bowie! Being a huge Bowie fan, I totally freaked out when I found it. It has several scratches but it still sounds great. And some jerk drew Bowie a beard, as you can see. Well, I also was given a Bob Dylan record, and the record of the concert in Central park by Simon and Garfunkel! It's utterly beautiful and I have been listening to it all day long. Sound of Silence is such a beautiful song. Also, a friend lent me The Rocky Horror Picture Show! I love that musical, and "Sweet Transvestite" is so amazing.

Hope you are all fine!